When the Seminole Met Shakespeare

Death . . . The undiscovere’d country, from whose bourn
No traveller returns.—from Shakespeare’s Hamlet

Lt. William Tecumseh Sherman once described Fort Picolata as a beautiful place. Shaded by giant live oaks, with a calming vista of the St. Johns River, the calm and peaceful setting was a contrast to much of war-torn Florida. The fort had a single sentry house surrounded by a palisade of split pine logs. Picolata rested on the site of a now-vanished twice-built Spanish fort that had also been garrisoned by the British.  Inside the fort now were a few civilians who had fled for safety from nearby plantations, the fort’s soldiers and the beginnings of a wooden hospital. Outside the palisade were friendly Seminoles camping and an area with rows of crude crosses marking many graves of soldiers who had fallen to diseases or who had died at the hands of the Seminole last summer.

When  Williams C. Forbes and his theatre troupe disembarked on May 22, 1840, he must also have thought about the beauty about him. After two years managing his theatres in Savannah and Augusta, he was ready for his two-week tour to St. Augustine to increase his earnings. St. Augustine was only 18 miles away following a fairly decent road. Though he had toured extensively in America, Florida was undiscovered country for him, but he had heard how St. Augustine had swelled with soldiers and citizens recently in population due to the Seminole War. He was counting on the citizens to be hungry for entertainment, which was exceedingly rare in the frontier in the best of circumstances.

His troupe were experienced and hardened travelers, familiar with the repertoire which included Hamlet, Othello, Julius Caesar, Richard III, and the always good for a laugh,  Honeymooners. Tonight at Fort Picolata, he intended to perform Hamlet, Prince of Denmark. After introductions to the fort’s officers and a fine supper of venison and vegetables, he directed his stagehands to set up their simple set and prepare the props as the actors donned their costumes. The fort’s commander agreed to allowed Forbes to use a drummer and fifer in the play.

Scattered nearby the staging area were a bonfire, several beacon-lights and candle lanterns for illumination. As night spread its dark veil, Forbes looked up at the stars blanketing the sky, at the thin sliver of a waxing moon, and the ghostly white shroud of moon flowers in the distance covering the tops of many trees. Soldiers, civilians, and Indians sat on the ground or stood to see the play.  For many in the audience, this was their first play and certainly their first experience to Shakespeare performed by professional actors.

They began with a veil dance by Miss Rosalee, accompanied by Mr. Wegher on his violin. As she whirled and pranced about, she would fix her eyes on a soldier in a flirtatious manner and then glide over to another.

With himself as Hamlet, Rosalee as Ophelia, Fanny Isherwood as the Queen, and Thomas Lyne as Horatio, and using the secondary actors for other parts, they plunged into the dark tragic world of Hamlet’s Denmark.  With the dead were scattered on the ground around him, Horatio (Mr. Lyne) closed out the play saying, “Take up the bodies: such a sight as this shows much amiss . . . .

The drummer began a death march. At first there was a soft silence, enhanced only by the night sounds of crickets, tree frogs and loud hoots of an owl. Then there was applause and cheers. The dead Danes arose and lined up around Forbes and they bowed.

“Goodnight to all,” Forbes said with a flourish.

The next morning, after a breakfast of coffee, hardtack, and cornmeal mush, the troupe packed for their short journey on the straight and relatively smooth road to St. Augustine. Forbes, the Isherwoods and two actresses boarded a borrowed stagecoach.

The other actors loaded a wagon loaded with the costumes, props and set materials followed behind, with a FORBES ACTING COMPANY sign mounted on the wagon’s side. About seven miles outside St. Augustine, with the stagecoach long out of sight, the slower moving wagon was ambushed by Seminole warriors led by Wild Cat and John Horse.  As was their custom, the Seminole loosed  deadly rifle fire when the travelers came into range.

In the first volley, Mr. Miller, who had hitched a ride on the wagon to St. Augustine, the secondary actor Vose, were killed immediately. The German musician Wegher attempted to flee but was shot as he stopped and begged in vain for his life in German. The black driver and G.C. Germon were able to hide in the palmetto scrub. Thomas Lyne hid in a hammock and spent a miserable night in a tree, and that morning set out on the road and caught up with Germon and they walked until they found soldiers at Fort Searle.  Mr. Hagan, one of the drivers, hid until dark and somehow made his way to a nearby plantation owned by an Army Colonel.

The Seminole lost interest in the ones who had escaped the sudden and savage attack and set to plundering the wagon for the spoils of war. They broke open the luggage and with whoops and laughter began trying on the troupe’s colorful costumes, medallions, and bling jewelry and applying the troupe’s makeup to their faces. One retrieved a huge sword and chased another around the wagon, poking him playfully in the arse. Another, donning a beaver-skin top hat, found a jug of whiskey which was passed freely around the war party. The warriors were silent for a moment, then nodded and grunted in approval when Wildcat, wearing a Viking helmet, held up Yorick’s skull and whispered words of death to it.

While the Seminole in their new tunics, bloomers, sashes, various women’s clothes, and buckled shoes were enjoying their parody of Shakespeare, another wagon with a driver and three passengers from St. Augustine approached the macabre scene. These travelers too were quickly attacked by the crazed players cast to play parts directed by the demon-fueled Florida war. Francis Medicis, the mail carrier, was killed along with A. Ball, a carpenter from Massachusetts.  The third passenger and the black driver escaped on foot to Fort Searle.  As soon as the news reached St. Augustine, a militia was sent out to hunt the raiding Seminole and to retrieve the bodies of the slain. As usual, no Seminole were found. They had simply vanished again into the trackless Florida wilderness.

The Seminole thespians were seen in their Shakespearean costumes on several occasions many months later: Wildcat in the turban and robes of Othello, another in the royal purple and ermine robe of Richard III, and others decked out in the crimson vests, tunics, and plumes of Forbes’ troupe.

Forbes and his troupe who made the trip safely, the residents of Saint Augustine, and the soldiers who saw Wildcat and others in their wild Shakespearean garb, never forgot the images planted in their minds when the Seminole, in the wild and savage Florida war, transformed themselves into characters from Shakespeare’s tragedies. And each time one would read a selection from Hamlet out loud, they would remember, and he or she would retell the story of the Massacre of the Theatre Troupe in an undiscovered country.

As the flier below shows, I’ll be at the Basin Book Fair in Midland, Texas on April 9, 2022. I scanned some websites about the value of book fairs in general and here’s what I discovered:

I hope you will consider visiting this event! It looks like it will be great fun! 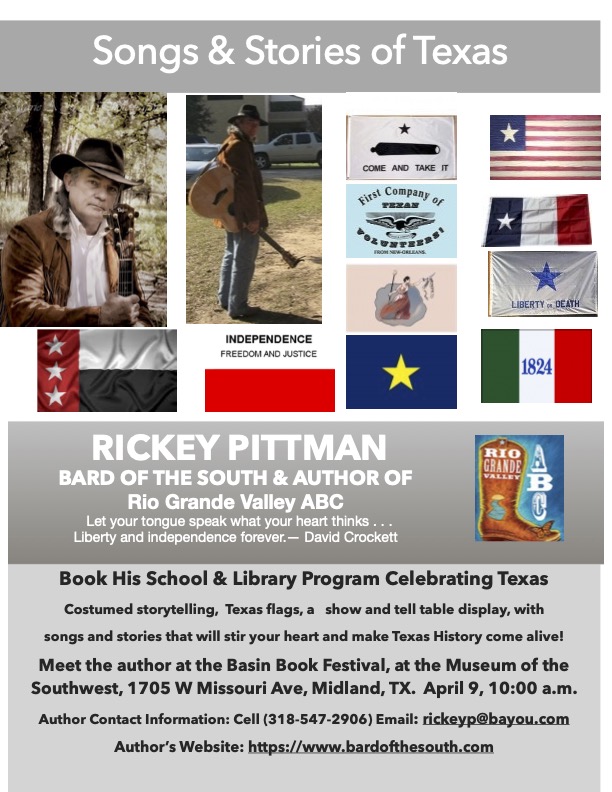 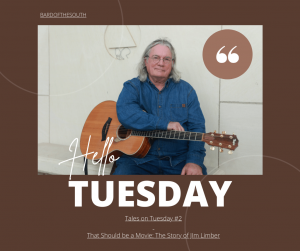 I’ve long respected and admired the acting talent of Matthew McConaughey, especially in his performances in Dallas Buyers Club and True Detectives Season One. After listening to his reading of Greenlights in audio form and obtaining the printed book (Crown Pub.), I feel I better understand the man himself and am even more impressed with his talents, as I’m sure you will be too if you read (or listen) to it. As McConaughey says in his opening, this is not a traditional memoir, but rather an approach to life, a playback based on adventures in his life that he considers significant, enlightening, or humorous, and he encourages the reader to subjectively adopt his experiences and advice to shape or change his or her view of reality or to change.

I am sure your encounter with Greenlights will increase your awareness of life, begin or continue your own journal, resurrect your own family memories, cause you to notice bumperstickers, (his unique spelling), plan your own wild adventures, increase your determination to reach goals, and inspire you to create and express yourself in poetry, song, or art. This book is a reminder that there can be as we say in Cajun Louisiana: Joie de vivre. 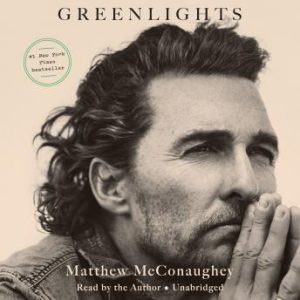 You, who are on the road / Must have a code that you can live by—Crosby, Stills, Nash, & Young

Every Tuesday, in my blog and on my Facebook pages, you will find one of my tales that I hope will feed your imagination, inspire you to discover and develop the greatness I believe is in you, to make you think, and to nudge you to create something personal, beautiful, and important in some way. A tale is defined as,  a fictitious or true narrative or story, especially one that is imaginatively presented. This is my first tale, written with a nod to NCIS character Jethro Gibbs, who after years of life and career experience developed a code to live and work by. I decided to post of few of my own rules that are important to me. I hope to collect enough of these rules to create a book eventually. Let me know what you think,