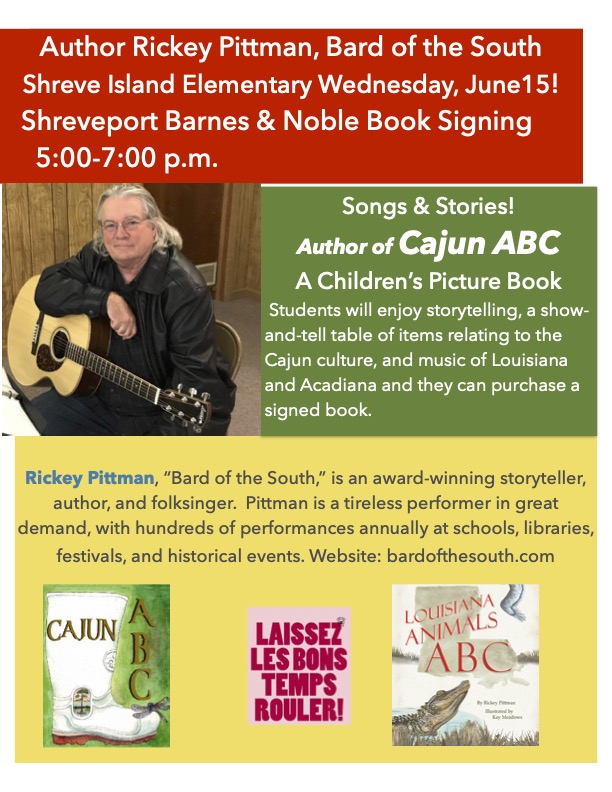 Feel free to share this information!  If you are near one of these Barnes & Nobles, stop by for a visit! I’d love to meet you in person! 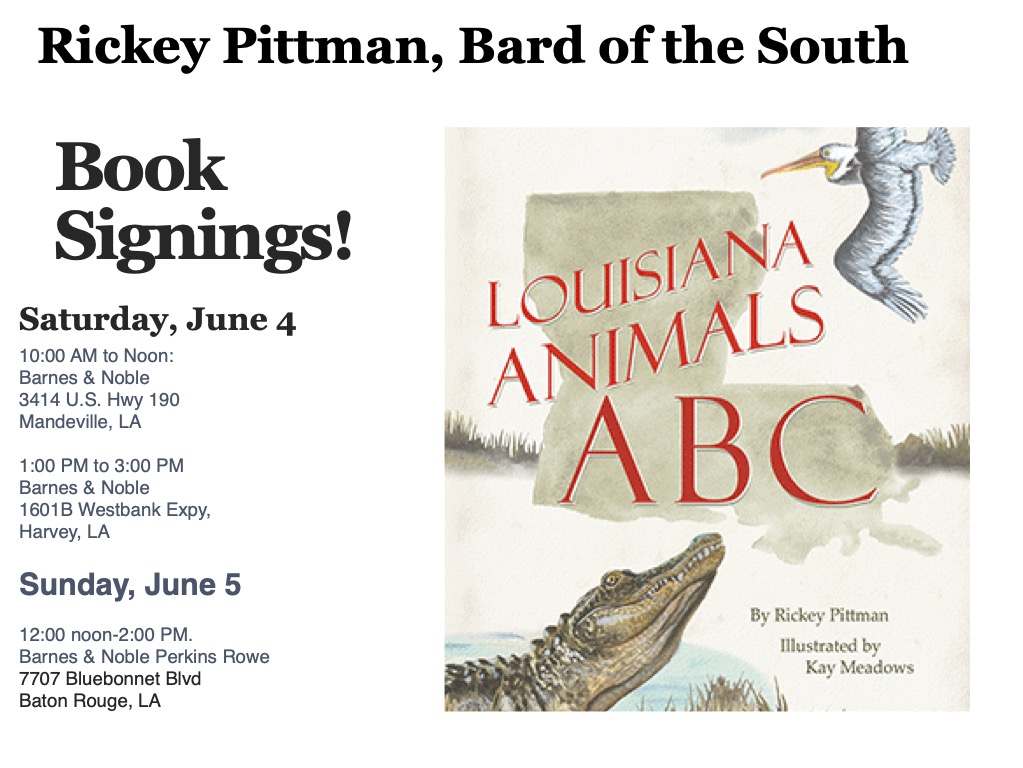 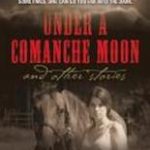 Ever since Indian Territory days, my family has fished this Red River. Mama always said there ain’t no call for us to be ashamed of it neither. She says the first apostles were fishermen, and that if fishermen are good enough for Jesus, then the rest of the world will just have to accept us too.

When they finished the Lake Texoma Dam in 1944, the Red River changed, and our family had to change with it. Now, most of our fishing time is spent on the lake. We also started guiding some, helping those tourists with more money than sense to catch sand bass or stripers, or get them to some ducks and geese in hunting season. They’re surprised we ain’t got no fish sonar or duck radar or fancy gear like that. We just know where the fish are and where the ducks like to go. Ain’t really much to it if a man pays attention.
The life of a fisherman ain’t as simple as it used to be. Now I gotta fool with getting all kinds of permits.

My daddy fishes with us some. He still cain’t read, so I have to read each year’s new rules to him. The state says we gotta count and measure fish, and throw back the game fish if they get tangled up in my nets or traps or get on my trotlines. I have to throw them back even if they’re gonna die. Seems like a waste of good fish. Sometimes I keep them anyway and take them over to Hendrix and give them away to the colored people there. I guess that’s okay, long as I don’t sell them. Sometimes I wonder what these state bureaucrats are thinking. If they’d just talk to a fisherman, they’d get lots of ideas. But I reckon they don’t care for talking to someone who knows how to do something they are passing laws for. No one used to pay us fishermen much mind. Now, we get more attention than I care to have from all kinds of folks, but mostly from rabbit rangers who seem set on catching us breaking some crazy law someone thought up.

Yet, I ain’t got it as bad as some. I read one story of some fellows that got put in the pen for importing half a dozen lobsters that were an inch or so too short. The paper said that government prosecutors worked on this case for six months. Seems like six months of detective work and lawyers would have cost a passel of tax dollars to prosecute
this lobtsergate conspiracy. I hope they don’t get so desperate to keep a job that they would pick on poor fishermen like myself.

We make most of our money off the catfish we sell, but I noticed it’s getting harder to sell them. People are getting attached to that pond-raised catfish, or lately, that catfish or tapia that comes frozen all the way from China. But they don’t taste the same as river fish. Anyone raised on river fish can tell you that.

But what a lot of folks don’t know is that we got all kinds of good fish here, not just catfish. There’s brim, largemouth bass, crappie, gar, drum, buffalo, carp, black bass, sand bass, stripers, hybrids (I reckon a hybrid happens when a sand bass gets to know a striper real well), and spoonbill catfish that we snag down by the dam when the rabbit rangers ain’t around. We eat’em all too.

But even though I spend a good bit of my fishing time on Lake Texhoma, and she works me near to death, I still love that damned old Red River. She’s toned down some since the dam was finished, but she’s still got a mind of her own. She don’t flood much no more, like she did when she devoured the town of Karma, north of Bonham where my grandma had a store. Grandma told me how she and my grandpa just watched the river warsh the whole town away. Weren’t nothin’ they could do bout it. And there ain’t nothin’ lives there now. Lady Red must not have liked that town much.

The river used to have a bunch of logjams, but they’re pretty much all gone now. Daddy said that in his day the logs were so thick you could walk across the river and never get your feet wet. The river’s still got quicksand, even though it ain’t as bad as it was. I don’t know where it went to, but only a few spots are bad to have it now. People who don’t know about quicksand or can’t spot it are in bad shape if they get caught in it alone. It must be horrible for someone to get drownded in mud, being sucked down to the river’s bottom. I only got in quicksand once. Daddy hauled me out and told me how the last person he pulled out of quicksand was a woman, and he had to reach down and pull her out by the hair. She was real dead, he said. And then after making me take a close look at the quicksand, he whipped my little ass with a willow switch real good so I’d remember not to come near it again. I learnt right then what quicksand looked like and I ain’t stepped into it since. A good thrashin’ always helps the memory.

When the water’s high enough, I load up the kids and their grandaddy on the johnboat or airboat, and take them downriver, explaining to them all they need to know ‘bout the river nowadays. When the water’s too low for a boat, I walk its banks on Sundays. Sunday is the only day I don’t fish; it’s the only day our family ever took off from work. I find stuff—old bottles, lots of trash that I guess came down from the dam, ‘cause I sure don’t see no people around to leave it there. Sometimes I think the river’s got a mind of her own and just puts things where she wants when she’s tired of playing with it.

Mama says the river used to be haunted. Gave people some kind of fever that made them start killing folks. Ever time some good ole boy goes on a killin’ rampage, Mama says that the fever’s come back to the Red River Valley. “If’n you ever see someone who don’t belong down there, you be real careful,” she says. “Look at their eyes. The ones with the fever got the same look as a wild dog that ain’t afraid of humans no more.”

“How do people get well from this fever, Mama?” I asked.

“Ain’t but one cure,” she said. “They got to be put down, just like they’s a rabid dog.”
I think that fever’s been around now and then because my family’s found several dead bodies on the river or in the lake through the years. Drownings mostly. Some of them could swim, but they underestimated the strength of the current and the temperamental nature of the river. Sometimes I think she just don’t care for people thrashing around in her and gets riled up and pulls them down. Some of the others I just don’t know how they got there cause they still got their shoes and fancy city clothes on. You can tell they didn’t fall off no boat.

My house ain’t far from the Carpenter’s Bluff Bridge. We see folks down there in summer swimming and diving off the bridge. They go there at night too and build fires and drink and all. I couldn’t sleep one night and I floated down river, sittin’ in the front of the boat just sculling along, and I saw a bunch of folks underneath the bridge. They was sitting in the light of a campfire and I heard them carrying on.

Sounded like they were having a big time. When she’s a mind to, the river knows how to make folks real happy and feel like they belong there. Only difference between these visiting folks and me is that I belong on the river all the time.

My wife Sophie and I had us a bunch of kids, and all of them know how to fish. The littlest ones we teach to get bait. They seine crawfish out of ponds and ditches, dig worms, seine minners out of the creek and sell them so they can have some spending money. But I only got one out of the bunch that’s taken to fishing enough that I know he’ll be a fisherman all his life. When he ain’t in school, he’s with me. Elvin’s a tough one—you can tell by his callused little hands. He doesn’t cry when he gets wet or cold. He don’t mind getting his face blistered by the wind or sun. He works right beside me until the fish are all cleaned and we get everything ready for the next day.

One day we was warshin’ and mending our nets and he says, “You must have the cleanest nets in the river, Daddy. Why you warsh them so much?”

“Dirty nets don’t catch no fish, boy.” Then I tell him what my daddy always told me. “When Jesus called them first apostles, they was warshing nets when he found them. So right away he called them to follow him, ‘cause he knew they were good fishermen. They kept fishing too, only from then on they fished for men. A man’s got to keep his nets clean in life, boy, if’n he wants anything in them but trash.”

We was on the river one afternoon and my boy was walking the sandbars and stepped into some quicksand. I hauled him out of it and whipped his little butt with a willow switch, just like my daddy done me. And I explained to him how the river, she don’t cotton to a man bein’ careless. He’s got to pay attention all the time. I told him how the river’s different now, and how she’ll be different when he’s growed up too. Maybe then she won’t have no quicksand at all, but she does now, and he cain’t go messin’ around in it.

I don’t know why my family likes fishing so. I guess we were just meant to do it. But I know when I feel that tug on my line, and I feel that life there, it feels real good. And when I can sell a pickup load of iced-down catfish to the grocers, and go back home with money, it
makes me feel good to buy my family things they need. Good fishing goes in spells, so I don’t always catch as much as I want. Sometimes the river pushes the fish away from us just to see if we love her enough to stick with her. She ain’t run us off yet. Hell, we ain’t goin’ nowhere.