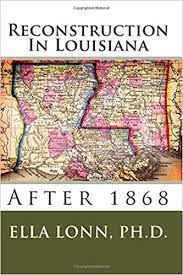 After the War Between the States, students of Louisiana history enter the dark and sad age of Reconstruction.  In her fine book, Reconstruction in Louisiana After 1868, Ella Lonn, Ph.D., reveals how the actions and corruption of carpetbaggers (opportunist from the North), scalawags (reconstructed Southerners), military and government officials ruined the state’s  economy, elections,  and education.  The purpose of this blog post is to share one example of how often in Reconstruction appointments and funds for education were misappropriated and funneled into the salaries of pathetically unqualified  people in important educational positions.  Lonn says this: “School directors were often unable to write their names. A letter (mailed Jan. 9, 1972) from the president of the school  board of Carroll Parish, as printed in the National Republican, is so ungrammatical and misspelled that it is almost impossible to read it. Here is the actual letter:

Cor J P York I visited new Welsh Peish in the crimes finnen the White People rebelling Jest as much as the dead When you was on the ball field Dod Swan Leven in Bellevue says by god he Wald like sweet the Dam Yankes start a public school in bellvue  are linden Orel any Whare between monroe an Schevepoer he Shat down a Young man I sew Well my names Simon Ford on Widarvne lone Place all so Jhon head and Jhon akfard given in bellvue cauth a young man name Anderson Smith Who Went to see a Young collard lady step him Struck Him 3000 licks with a new caw hide do for God Sake Sen them People petectheon. I promised them I Wold Send You.” (page 81)

This letter from the President of the School Board is only one of many examples of how federal and state government failed education in those Reconstruction days. My fear is that, because of the control and influence of the teacher unions, WOK administrators, the mindless movements to erase Southern history, arbitrary government mandates and executive decisions, Louisiana education could face a second Reconstruction no less painful than the first. I hope you will save and share this blog post.