Samizdat: The Ghost of Alexandr Solzhenitsyn

I never thought this day would come to America. The liberal left, the media, the governmental deep state have determined to crush and gain control over the MAGA movement that President Trump started. They began by immediately censoring the opinions, thoughts, books, art, movies, and protests of half of the American population. Twitter and Facebook have already closed the accounts of a huge percentage of its followers. The mainstream media (television and newspapers) have

In any war, attacking and closing down communication systems is a tested tactic. If the enemy can’t communicate, they can’t organize well enough to defeat you. I think they underestimate the power of the truth and the determination of 80-million American citizens.

It is time for Samizdat to reemerge.

Samizdat is the clandestine creating, copying, and distribution of literature banned or censored by the state, especially formerly in the communist countries of eastern Europe. It is literature that has no hope of being published in normal channels or if the writing is politically suspect. It is underground self-publishing that was passed from individual to individual. Writing and reading samizdat is a form of dissident activity, of resistance. With the increased pressure and propaganda of media, the schemes of political figures and powerful liberal elite, and tech monopolies, an underground press is needed.

Samizdat places the acts of writing, creating, and distribution upon the individual, As *Vladimir Bukivsky, Russian-born dissident in the 50s-70sk said about samizdat: “I write it myself, edit it myself, censor it myself, publish it myself, distribute it myself, and spend time in prison for it myself.” Think of how many American citizens get their information about politics, the arts, religion, and what’s really going on in the real America. Perhaps it’s a good thing that we will be forced to find other ways to express ourselves, to protest our treatment, and to change our society.

What forms will/could the new samizdat take?
1. People may learn to write real letters again.
2. New TV, radio, and newspaper media will emerge, though they will risk the censorship of the Deep State.
3. I predict that short wave radio stations will reemerge, a kind of Radio Free America.
4. There will be more spoken word, people sharing openly until pressure increases to control public speech.
5. American blogs, podcasts, and newspapers will move underground and build new audiences.

Alexandr Solzhenitsyn changed the world and the Soviet Union by Samizdat. I’ve been rereading his works of again. Besides saying, “I told you this would happen in Warning to the West,” I think his ghost would sadly shake his head and say, “Your mainstream media and the political Deep State have damaged much of America, cover-upped corruption, and tried to erase America’s past, but they haven’t won yet. Your own samizdat will immerge soon,”

*Vladimir Bukovsky, a Russian-born British human rights activist and writer. From the late 1950s to the mid-1970s, he was a prominent figure in the Soviet dissident movement, well known at home and abroad. (Wikipedia)

I love mythology. In a recent read I came across the trolls. This made my mind jump to a modern day troll issue.

TROLLS IN THE LAND OF MAGA

Under the Facebook Bridge,
Lived a clan of trolls.
Ugly and stupid and bug-eyed,
They had no self-control.

Anyone who tried to cross
Their bridge into MAGA land,
Had to endure many insults,
And pay taxes into their hands.

As people crossed the bridge,
Travelers would often speak
About Deep State crooks & election fraud,
This angered the troll-like geeks!

All it took was one wrong word,
To cause them to attack,
They wanted to frustrate and frighten,
So you’d never want to come back.

Church bells made them crazy,
Religion was not their thing,
“I’m Proud to be an American”
Was a song they’d never sing.

Once, travelers played the Trump Card,
It scared the trolls to death!
They fled and hid in the Swamp,
And tried to catch their breath.

But to this day Trolls continue
To attack, provoke and annoy,
Even eating MAGA Hobbits,
Not caring who they destroy.

I recently conducted an interview with, Nadia, a Russian immigrant. Tall and attractive, she’s been a LEGAL citizen now for a few years. She was born and raised in Minsk, was a Lenin Eagle and later a Pioneer. She now resides in New Orleans. Until the COVID shutdown, she had been making a living with a floral business and decorating for weddings and special events.

Our conversation led to describing her life in this American COVID shutdown. We talked about Alexandr Solzhenitsyn, whom she admired. When I told her that I had everything Solzhenitsyn had written, she said, “You’re the first American I’ve talked to who knew anything about him, and the first who really understands what life is like in a communist country.”

“How would you describe your life now?” I asked.

“I feel like I’m living in Russia again,” she said. “I haven’t worked for months. Since I’m self-employed, the only money I’ve been able to receive is a little bit of relief money. In Russia, the government will provide a stipend, but not enough to live on. The government controlled where you could live, where you could go, what you could buy—if you had any money—and controlled what you could say. The government determined what was acceptable to say.  You had to be very careful with what you said, Neighbors would turn you in for making your own bread or making your own vodka, so that had to be done in secret. If you wanted to purchase something, anything, you had to count on waiting for hours in very long lines. Many things were not available at all, not at any price.”

She paused and looked directly at me. “That is my life now. I’m living in a ___ hole. Sometimes I think I might as well be back in the Russian ____ hole. I see how Americans are headed toward the same kind of life—with a government-controlled media, where you have the rich elite who control everything and who have everything and anything they want. Then there’s everyone else, the rest of the population that the leaders don’t care about.  The rich leaders are hypocrites, who feel they don’t have to obey the same restrictions and rules as a normal citizen.”

She paused as if remembering the little girl she once had been standing in the breadline for hours. She went on to describe the total censorship, the ruined lives of those who spoke out, how they used mob violence to deter protests or stepping out of Party lines, and the common fraud and power struggles in elections.

The similarities between her life experiences and what she is experiencing now were striking and obvious.  She concluded our interview by saying, “Most Americans don’t know what it’s like to live in constant fear of being arrested, spied on, fined, or for a family of four to live in one very small room. 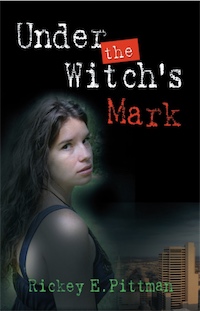 Under the Witch’s Mark is an excellent example of coming of age during the Age of Aquarius.

In the late 1960’s, millions of Flower Children rebelled against their conventional, post World War II upbringing by experimentation with psychedelic drugs, “free” love and out of the norm costumes and music. They (we) embraced any behavior that would shock society.

By the early 1970’s the movement had become wide spread with some young people learning that freedom from convention led down roads from which there was no return.

Rickey Pitman simply and distinctly gives the reader a glimpse of how evil walks among us and how quickly innocence can turn into evil when the weak and susceptible.

Those who believe the devil is a myth will rethink their convictions after reading Under the Witch’s Mark. 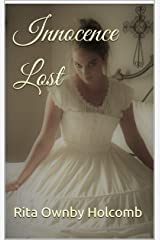 The first novel I read in 2021 was Innocence Lost: The Legend of Henrietta Clay by Rita Ownby Holcomb. (Fountain Springs Publishing).  The novel is well constructed with 44 dated chapters starting with August of 1860 and ending Christmas Eve, 1864. Innocence Lost is the first in a series that spans from 1860-1920.

This construct gives the story the feel of a memoir, telling the story of fifteen-year-old Henrietta Clay from Hogeye, Arkansas. The young, naive girl marries a man who promises her a beautiful life, but instead uses her and drags her into the seedy world of war-torn St. Louis. Fate rescues her from her difficult circumstances and leaves her with the gift of a child and an inherited brothel.  Henrietta Clay is actually the great-great-grandmother of the author.

The author skilly constructs her plot with the kind of chapters I like to read: short enough to read in one sitting with very descriptive writing that moves from one conflict to another. The storyline has plenty of conflicts and twists and at times has the feel of a romance novel, but as mentioned before, it feels more like a memoir, and one that is full of historical details indicating the extensive research the author must have done,  Even though I’ve long been a student of the Civil War, some of these facts are surprising, such as introducing Lissie Keckley, a free slave who became the personal dressmaker of Mary Todd Lincoln. As the War Between the States is always in the background, the protagonist is an observer of the St. Louis civilians as well as the Federal and Confederate officers and soldiers whose destinies and actions affected the city.  In a way, one could say that this is very much a story of St. Louis.