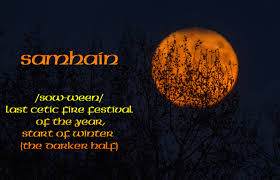 The ancient Celts had four Fire Festivals, and Samhain is thought by many to be their most significant celebration, held Oct. 31-Nov. 1. The Druidic festival divided the summer from the winter seasons. The Celts believed the veil and line between this world and the Otherworld, between the living and the dead was the thinnest and this thin line allowed souls and spirits to pass through into our world. Reckless travelers could meet any of these spirits at night, and that encounter could be either be pleasant or horrifying.  You can read a great article on Samhain and the Celts and its celebration in Ireland HERE.

Druids, who were important to this feast, were teachers, judges, historians, lawyers, priests, physicians and seers. They were thought to be shapeshifters and could state exact date and time by a single glance at the night’s sky. A druid required twenty years of training. They were so influential and powerful that the Romans launched a campaign to exterminate them and to destroy all their shrines and oak groves. There were only two religions that the Romans outlawed: the Druids and Christianity.
Here’s a short video about the Druids.