Thirty Days to Halloween, Day 12: The Witch of Endor 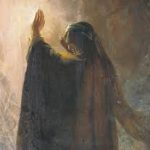 If you are not familiar with I Samuel 28 in the Bible and the story of the Witch of Endor, Halloween is a good time to read it. I’m working on a detailed short story account of this rather strange event. Basically, the story is this: Things weren’t going well for Israel’s King Saul. David and his men were running for their lives and Saul and his army find themselves confronting a fierce and determined army of the Philistines. Saul literally trembles in fear.   He sought guidance from the Lord, but received no answer by dreams, by Urim, or from the prophets. So, he seeks help from a witch in the town of Endor. She was a necromancer (who could talk to the dead. He and two of his men disguise themselves and go to Endor and asks the witch to call up Samuel. Samuel’s ghost did indeed appear, the woman discovers Saul’s true identity. Saul seeks advice from the ghost of Samuel and is given the bad news: That the next day Saul and his sons would be with the dead Samuel. Here’s a short video that gives a short, but more detailed explanation of this passage.