Today, I begin my Thirty Days to Halloween series that will feature original stories, poems, reviews of books, movies, and music devoted to the season. I hope you enjoy it. Today’s post is an original poem I wrote while in my Introduction to Music Class at ACU. I was inspired by the graphics in the professor’s PowerPoint and by the Danse macabre music. This was a poem that I wrote quickly. Here are the poem and graphics. Tomorrow I will post a video of the wild fiddle music itself. According to legend, Death appears at midnight every year on Halloween. Death calls forth the dead from their graves to dance for him while he plays his fiddle. 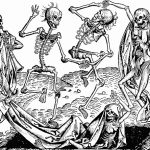 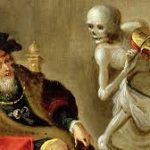 I danced with death and did not know her.
And the  out of tune violin
Played on through the night
To a song that had no end.
As we danced, I wondered,
When would the music end?
She answered, “This dance will last
Until you fall like other dying men.”

Death had soft hands and a pretty face,
Not like I might have feared.
Her eyes looked deep inside my heart,
And she shed a single tear.
A warm embrace she gave me,
And the world began to spin,
My fingers slipped from her hands,
The fate of dying men.

Each must stand to play a part
In an endless symphony,
And dance to increasing tempo
With the ghosts of one’s destiny.
Look closely at the one you hold,
The hands, the eyes, and face,
The face of a lover,  a friend or a God,
That will take you from this place.
–Rickey Pittman 1992