Burning Plantations in the Seminole War

When Florida became an American territory in 1821, and likely even before that in the days of Spanish and English occupation, the cheap, rich fertile land that was able to magically produce bumper crops attracted swarms of settlers eager to cash in on the prosperity the land offered. And soon plantations appeared in the hundreds. Though many of them had slaves to help work the land, the houses were usually not constructed (at least at first) in the lavish Antebellum South’s image of a plantation house, but instead were homesteads, ranches, and farms built by families with a dream. Florida gave them pleasant weather, plenty of water, an abundance of timber, and long growing seasons. The rich land gave the settlers bumper crops of cotton, corn, and sugarcane.

However, because of the Seminole Wars, not many of these plantations saw the quick prosperity their dreams had imagined. Instead, they saw their dreams literally go up in smoke, their families threatened or murdered if they did not flee to Saint Augustine or the under-manned and poorly protected military posts. The existence of those living on the plantations was often an ugly contrast of beauty and ugliness and constant fear of the danger that could fall upon them.

The Seminole, driven from their more northern homes, had determined to move no more, and they resented the ever-increasing presence of the plantations that devoured the land they loved. The U.S. Army and state militias played a game of chase, zigzagging across the state and down the coast from Northern Florida down to the Keys and from one attack to another, trying in vain usually to capture the well-armed Seminole warriors who seemed able to quickly vanish into the hammocks and swamps.

This was a brutal time to own or live on a plantation in Florida.

From 1835 until 1849, plantations were targets for the swift-moving Seminole and Negro bands, sometimes numbering 100 or more. They would plunder the crops and stored food, the cattle, horses, mules, and hogs, and burn everything they left behind. And they left plenty of mutilated corpses behind to remind the invaders of the high price that would be paid if the homesteaders would not leave. Farmers, loggers, cowhunters, mail messengers—all were frequent victims.

The soldiers in the American Army assigned to defend the plantations and ranches were often largely foreign, illiterate soldiers scarcely able to speak English.  They suffered from brutal, capricious officers, from the boredom of military life, from fatigue and exposure to the grueling Florida summers that sapped their strength and will. Though many soldiers died at the hands of the Seminole in battle or ambush, death came to many more through diseases borne from mosquitos and other insects as well as a poor diet and deadly water. The 80-100 forts built in the Seminole Wars were usually undermanned and often attacked or threatened.  Even those commanding the military sometimes felt overwhelming pressure and despair. At least two officers reached some kind of breaking point and committed suicide: Colonel John Lane, who plunged a sword into his own head, and a Lt. Wheelock, who shot himself.

Though many families sought safety in the forts when there was a threat of attack, there was truly only safety for the plantation families only inside the large cities of Tallahassee, Saint Augustine, and Jacksonville. Nearly all of Florida, including the military, was in a panic.  Rumors of atrocities fueled the fears of Floridians.  Travel between cities was a frightening experience for one never knew when the Seminole would emerge from the palmetto and hammocks and attack.

At one time, all plantations south of Tampa were destroyed.  By 1835, many plantations were burned along St. Johns and Tomoka rivers. The diaries of soldiers told tale after tale of farms—burned, desolate, and deserted. Many who left their plantations never returned. Many who wouldn’t leave their farms, died.

It was not only the number and frequency of the Seminole attacks that frightened people—it was the ruthless cruelty the Seminole and Negro warriors demonstrated. Neither women nor children were safe when in Seminole hands.

Twelve miles from Tallahassee, in Wakulla County, a man, his wife and two children were killed. Twelve miles south of Mariana, two daughters of the Morris family were set upon while tending their cows by 30 Creek warriors. The girls were shot with arrows and had their brains dashed out by lightwood knots. The warriors only took the family’s bacon and flour as loot.

In Mandarin, the James family and the Harley family were both attacked. Mrs. Harley and her infant were both killed. The settlements of Wacahoota and New Smyrna were burned by 50-100 Indians. William Cooley’s wife, their children and tutor were killed at their home at the New River settlement while Cooley was away salvaging a shipwreck. The New River settlers then abandoned the area and it would be many years before they returned.

Wiley Thompson—sutler and Indian agent in charge of the removal of the Seminole from Florida—and Lt. Smith were attacked and murdered just outside Fort King. The sutler’s store, in sight of the fort, was burned and all his staff killed. Thompson himself was shot over a dozen times. Osceola led in this attack.

The plantation homes of many others were put to the torch—the homes of Moses E. Levy, Gabriel Priest, Mr. Dunham, the homes of de Peysters and the Heriots, the Spring Garden plantation; the homes of Henry Cruger, the Andersons, Samuel Williams, and many others felt the wrath of the Seminole.

Fort Defiance at Micanopy and Fort Drane near the Clinch plantation were both eventually deemed so ineffective in protecting the settlers that they were abandoned. About four miles from Clinch’s Fort Drane, the home of Wiley Brooks was burned to the ground. In Charlotte Harbor, the customs director was killed and his home burned. Indian Key, once the capital of Dade County, was viciously attacked by Spanish Indians whose leader was Chekika. At least 18 died. This was called the Perrine Massacre, in honor of Dr. Perrine who was killed and whose family barely escaped.  A town in Dade County is named for the good doctor.

And so, the war dragged on with the new Florida settlers.  Now, the forts and early plantations are nearly all gone, but the place names remain. And perhaps the memories, deaths, and suffering of those early Florida pioneers will remain. I would not be surprised if their ghosts walk among us as well. 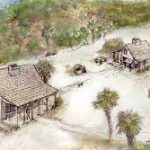