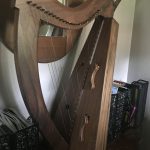 It is said by those who heard the tales from the ancients, the old men and women of Wales, who heard the story first from those who had memories of the Druids and even Arthur’s sword. It is said that on those late summer afternoons when the sun is still shining hot and strong and raindrops fall from the blue sky, fall warm on your skin, it is said that if you sit in a quiet place of rocks and trees and if you shut your eyes, you’ll hear a harp’s melody, soft and sad and sweet as a harper using golden strings.

The harper is no less than Thomas the Rhymer, bold and gifted and impulsive, and a man who had a heart as passionate as his music. He had journeyed to Wales, into the mountains of Snowdonia, to perform for a particular noble and to create a song by which the occasion would always be remembered.  The noble’s daughter was a young lady, named Gwen, with porcelain white skin,  eyes blue and wild, and long, auburn hair with golden streaks. In the candlelit room, she would smile and her eyes would shift to gray and to almost green. When the king summoned him to begin playing, she listened when he played and clung to every note, to every word of his verse. Thomas watched her close her eyes and echo-whisper the lines of the poem. He ended the song and began another, his heart swelling in him in a way that only love-struck musicians know. The music shifted from praising the king to extolling Gwen’s beauty. He wove the words he found in the well of his heart and declared his love for her.  He sang stanza after stanza. It seemed he could not stop and sang for the rest of the night.  She seemed to know. When the meal was finished and his songs ended, the young maiden rose, looked at Thomas, then at a stairwell. He nodded, laid down his harp, and followed her.

There in the stairwell they kissed and declared their love. Thomas spoke to her father that night and he gave the couple their blessing in the condition that Thomas would stay with them.  Oh, those were times of such music!  Thomas’ heart swelled with new melodies for his new love.  He envisioned a life with her—she traveling with him as he won the world with his harp and verse.  This would require money, for though Thomas could easily bear the hardships of the road, he would not inflict that lifestyle on his new bride.  Thomas vowed to enter and win a harp competition, some say it was in Cardiff, others say it was in Ireland, and return for her with prize money in hand.  Months went by, but Thomas never returned. Gwen was sick with worry. These were not happy days in Wales. Longshanks’ armies invaded to crush Llewellyn’s rebellion as he had the rebellion of the Scots.  Those nobles who weren’t killed were taken captive and sold into slavery.  Gwen was one of them. He never saw her again.

When Thomas finally returned, he found Gwen’s home burned to the ground, and the land of Wales filled with death, hunger, and lamentation for those slain and missing. He slung his harp on his shoulder and trudged back to Scotland. As you may know, there he was seduced by the faerie queen and vanished from the land for seven years.

Oh, there were many adventures there and it was there he was given “the tongue that could not lie.”  The queen of the fairies took him to Belenus, the sun god of the Celts. The sun god asked Thomas, “Have you ever been in love?”

“Tell me her story in a song, harper.”

Thomas sat on a stone. tilted the harp against his left shoulder, brushed the strings of his clarsach with his left hand, and began. In a minor key, he told the sun-god the story of Gwen, his love for her, the plans they had, his returning to find her gone, and he knew gone forever. He told of how his heart had cracked, and how he had fallen into despair, and become almost mad with grief. When he was finished, the sun god’s palace in the Otherworld was silent. Belenus leaned forward, touched his face with hands and wept, and the sun-god’s tears fell through the Otherworld to the earth. It was a beautiful sunny  afternoon, and this was the first time mortals had ever seen rain fall when the sun was shining. And today, when those warm teardrops touch your cheek like a kiss, and you look up into that bright sky, know that it only means the sun-god has once again remembered the sad story of Gwen and Thomas and he weeps again.  And if you close your eyes and listen closely, you’ll hear the sad notes of the Rhymer’s harp.