Any thinking, observant person realizes that this age is in great turmoil. With the exception of the Visegrád, Europe is crumbling in the face of the invasion of foreigners. These invaders (mostly Muslim) devour resources, resist assimilation, reject Western and Christian values, assault and terrorize European citizens, and openly assert their intent to impose Sharia law on their new homelands. They are not far from victory. The elite leaders of the nations under attack are weak and seemingly indifferent to the need to respect and protect their citizens and rescue their nation from certain destruction. I’m beginning now to understand the Crusades and Crusaders of the past who also faced invading hordes of savage people who wanted to pillage and conquer the civilizations of Europe and the achievements of Christianity.

There are no easy answers to our modern day dilemma. Whatever cure we choose will be costly and painful. Whatever we decide to do will require men (knights) of sound ethical values, determination, and toughness. In the movie, the Kingdom of Heaven, a priest asks, “Does making a man a knight make him a better fighter?” Bailan answers that it does.  I suggest that a look at the Medieval Code of Chivalry still has value for us today. Those who live by such a code without a doubt will be better and will make the world a better place. I think the modern day application of these principles is obvious.  I’ve studied and condensed the main points of chivalry in this list:

1. Honor, defend, and love God, the king (leaders), one’s nation, and the church.
2. Respect for women.
3. Courage in battle
4. Truthfulness and self-control
5. Generosity.
6. Defend the helpless, fight against injustice and evil.
7. Make war against the infidel without cessation and without mercy.

Hopefully, you can see how these qualities are missing today. As Crosby, Stills & Nash said in their song, let’s teach our children well. 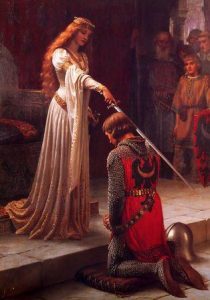