EPIGRAPHS FROM UNDER THE WITCH’S MARK by Rickey Pittman 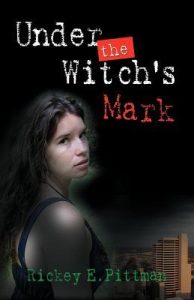 An epigraph is a short quotation, phrase, or poem that is used at the beginning of a piece of writing that suggest a theme or suggest a mood or used to steer the reader’s mind in some direction. I like to use epigraphs in my writing, sometimes before every chapter in a book or novel or at the beginning of short stories or poems, directly under the title. Here is a list of epigraphs I used in my novel, Under the Witch’s Mark: (Ordering information is below)

I always take a chance. I can’t just play safe. Dancing on the edge of the precipice—Jimmy Page

Today, I felt pass over me a breath of wind from the wings of madness.—Charles Baudelaire

The female of the species is more deadly than the male.—Rudyard Kipling

The groves were God’s first temples.—Bryant

Part at once; all farewells should be sudden, when forever.—Byron

Dreams are a world of the dead in the hues of life.—Felicia Hemans

Dressing the wound hurt. Everything that has happened to me since has hurt.—Herman Hesse in Demian.

A woman whom we truly love is a religion.—Emille de Giradin

Yea, they sacrificed their sons and their daughters unto devils, and the land was polluted with. blood.—Psalm 106:37-38

Here’s information on how you can order Under the Witch’s Mark!