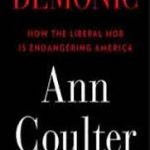 To understand what is happening in the many recent riots in many liberal cities of our country due to the looters, vandals, and anarchists, it is helpful to read Ann Coulter’s book, Demonic: How the Liberal Mob Is Endangering America. Coulter reveals all the psychological characteristics of a mob–practicing groupthink, slavishly following intellectual fashions, and periodically bursting into violence. After you read this, you can understand what she means when she says, “You can lead a mob to water, but you can’t make it think.”

This is one of the books that helped me to understand the mob mentality and causes of the riots, looting, violence, and vandalism of the recent troubles.  Our government should hunt down, arrest, and prosecute the instigators of these troubles as soon as possible. If we don’t, they will only cause more anarchy again.