Here is the opening chapter of my historical novel about the Seminole, Death in the Little Winter Moon.

Dr. Frederick Weedon checked Osceola’s wrist for a pulse. He dropped the limp arm, and it thumped against the Seminole’s chest with a hollow sound. He lifted one of the Indian’s eyelids with his thumb. “What time is it, Captain Morrison?” he asked.

Captain Morrison, leaning against the infirmary’s wall, held Osceola’s silver-plated Spanish flintlock cradled in his arms.  He stroked the long barrel with his fingertips, and then set the rifle against the wall. He lifted a gold watch from his watch-pocket and held its face up to the dim light of the lantern on the surgical table.

“Dr. Strobel, let the medical records show that the great Seminole war chief, Osceola, passed away at 6:20 PM, January 30, 1838, due to malaria and tonsillitis complicated by abscess.”

Benjamin Strobel was Dr. Weedon’s attendant physician, a surgeon and anatomy instructor at the Medical College of Charleston.  While Strobel attended to the report, Dr. Weedon turned to the Seminoles gathered in Fort Moultrie’s infirmary and said, “He is dead.”

Osceola’s two wives and boy-child and the other Seminoles in the room wailed loudly.

Dr. Weedone stepped outside to address the Charleston elite and other whites who had gathered to hear news on Osceola’s condition.

One woman asked, “How is he, Doctor?”

The woman gasped, covered her mouth with her hands and wept quietly. A man patted her on the shoulder, bowing his head and whispering a prayer. “It is shameful that such a great man die after being taken under a flag of truce!”

A reporter for the Charleston Courier raised his hand and said, “Dr. Weedon, can you give me more details on Osceola’s death?’ He opened a small notebook preparing to jot down details.

“Dr. Strobel and I will be happy to meet with you and answer all questions after Osceola is buried.”

One man in the crowd said, “I’m glad the savage is dead.  My brother died in the Florida swamps fighting him.  A fine soldier, my brother was.” He glared at the doctor. “I want to see his stinking body.”

Dr. Weedon ignored him, turned and walked back into the infirmary. “Captain, Morrison,” Dr. Weedon said, “Direct Osceola’s wives to prepare his body for burial, and see them to their quarters. Dr. Strobel and I have a long night ahead of us and we can’t work with them carrying on so.  Go to the quartermaster and order him to prepare a coffin.”  Weedon glanced at one of Osceola’s wives, great with child. He had examined her earlier and she had shown signs of hemorrhage. “Make that two coffins—one a small one.  I will also need your assistance.”

After Osceola’s wives had painted Osceola’s face with red ochre and stacked his prized possessions by the cot, and, they too were shown out.  Dr.’s Weedon and Strobel lifted lifted Osceola’s body from the cot and placed it on the surgical table and undressed him. Picking up his scalpel, Dr. Weedon cut off a lock of Osceola’s long hair. He stuffed the plait of hair, Osceola’s Ostrich feathers, knife, earrings, clothes, and powder horn into a cotton sack. He removed Osceola’s gold necklace, held it up and watched the twisted chain spin in the air. He squinted his eyes, as if mesmerized by the small flashes of light emanating from the metal, and slipped it into his pocket.  After Dr. Weedon scrubbed the paint from Osceola’s face, he and Dr. Strobel mixed the plaster for a death mask and applied it to Osceola’s face and shoulders. As the cast set, he and Dr. Strobel and Captain Morrison sipped on whiskey.

“Here, here,” Morrison and Strobel said, and they clinked their glasses against his and drained the whiskey.

“So, Dr. Weedon,” Strobel said, “What did you think of Catlin’s portrait of Osceola?  I rather liked it.  Made Osceola appear more human.”

“Human?” Weedon replied. ” I can’t believe that one drop of humane blood ever passed through his heart.”

Captain Morrison picked up Osceola’s rifle again. “Why, Doctor, What a thing to say. I heard Osceola describe you to the newspaperman as his best white friend.”

After they had removed the death mask, Dr. Weedon set a wide-mouthed jar filled with alcohol on the table. He prodded the cold stiffening muscles along Osceola’s neck and reached for the surgical scalpel.

Osceola’s memorial service was a news sensation.  He was to be buried with full military honors. Word of his death spread quickly among Charleston society which had been quite taken with the mixed-blood warrior who was taken through trickery—during a parley protected by a white flag.   A large crowd left their winter homes in the city, ferried to Sullivan’s Island and assembled at Fort Moultrie where the renegade Seminoles were held as prisoners, awaiting transportation to Indian Territory.

James Birchett Ransom, a local poet and author, read verses he had penned in Osceola’s honor.  William Patton Esquire of Charleston delivered a glowing oration of Oseola’s courage and character and presented Captain Morrison a headstone with Osceola’s name inscribed on it.  Mary Boykin, only fifteen but already thinking of herself as a writer, wept openly for the great chief whom she fancied her friend since she had first met him at the Dock Street Theatre’s performance of Honeymoon.  Mickenopa, Cloud, Coahadjo, and King Philip—captured Seminole leaders, all of whom admired and to some degree resented Osceola’s fame—in their colorful clothes stood close to Osecola’s family and shaman.  The rest of the Seminoles crowded behind them.  During the speeches the Indians nodded and smiled, pleased with the honors paid to their fallen hero.

Captain Morrison and the mayor of Charleston stood in front of the Charleston folk. After Negro servants deposited Oseola’s coffin into the grave, eight soldiers in full military dress marched to the graveside and snapped sharply to attention.

Private Johnson, one of the soldiers in the honor guard, whispered to the soldier next to him, “I never buried a headless man before.”

“What you talkin’ about?”

“Osceola ain’t got a head. Dr. Weedon cut Osceola’s head off and put it into a jar.  I saw it last night in his quarters when I brought two coffins to the surgeon.”

“Ain’t our business. Quiet down or you’ll get us lashed. Captain Morrison is looking this way.”

Captain Morrison strolled down the line of troops, stopped in front of Johnson and hissed through clenched teeth, “Private, you will keep your mouth shut during the ceremony or I will have you flogged.”

The soldiers fired their muskets and the sound echoed across the bay like thunder in the Everglades.

Note about the author: Rickey Pittman is a Seminole War reenactor, songwriter featured on his CD, Songs of the Seminole War. To order the CD, email the author at rickeyp at bayou.com. He is currently working on his historical novel about the Seminole, Death in the Little Winter Moon. This short story is one of the novel’s early chapters. 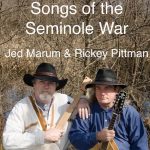